Artist Liam Gillick hasn’t seen them. Director John Waters has no idea where they are. Filmmaker Tony Conrad has his theories, but he’s not talking. But whoever you ask, the fact remains, the four members of the Austrian artist group, Gelitin (Wolfgang Gantner, Ali Janka, Florian Reither, and Tobias Urban) have disappeared! So Salvatore Viviano, artist, art dealer, and occasional collaborator in Gelitin performances, sets off on a cinematic search for the funniest boy group in the world. With an imposing microphone in hand, he questions artists, gallerists and curators about the group’s possible whereabouts. His imaginary quest provides the narrative framework for Angela Christlieb’s tour de force film, which both portrays, and itself, mirrors, the energy of Gelitin’s anarchic operations.  The quartet rose to fame with border-crossing and visually powerful performances, sculptures, installations, and photos.  They roll gleefully in the mud, incite audiences to acts of art destruction, attach stuffed animals to their testicles for a “fashion shoot”; dance naked with spinning tassels attached to their buns, or discusses who of the four’s excrement created which letters in the “Kackabet”—letters made from feces.  At one point, art dealer Christian Meyer analyzes, “Our world is always trying to rationalize things, an approach that Gelitin deliberately refuses.” Christlieb constructs her film out of a wealth of archival material, rhythmically assembled, and interwoven with stories and observations from various interviews. Art dealer Leo Koenig says that Gelitin’s art just makes him want to strip of his clothes, while artist Tom Sachs admits, “I wish my life were 10 percent more Gelitin!” After watching this film, maybe you will too! 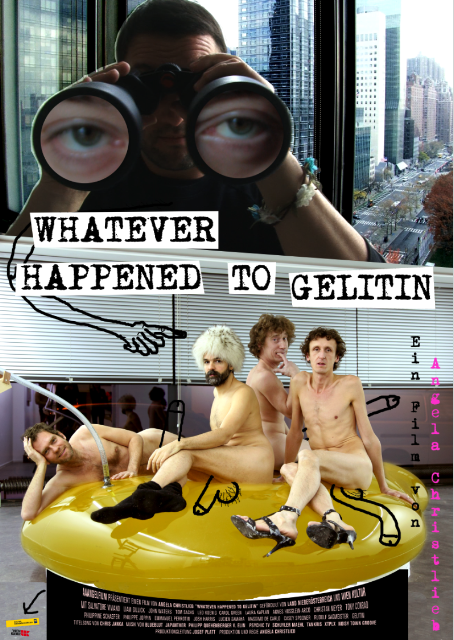